"From the bottom of our hearts, thank you." 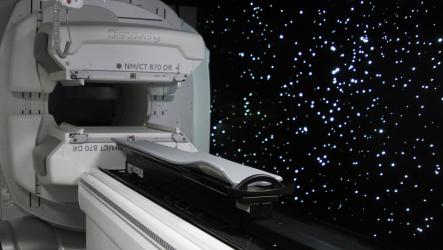 In 2019, The Children's Hospital Charity unveiled the state-of-the-art SPECT/CT scanner. Funded by £800,000 of donations, it has since been used in more than 800 patient scans.

Around the same time, doctors at Sheffield Children's found a mass in two-year-old Alice Latham’s abdomen. In the following weeks, her parents received the devastating news that Alice had high-risk neuroblastoma, an aggressive and hard to treat form of cancer.

Neuroblastoma affects around 90 children in the UK every year. The odds of survival for the high-risk form affecting Alice are between 40-50%.

In the weeks after Alice's diagnosis, the newly installed equipment played a crucial role in her treatment. The scanner's ability to fuse CT and Nuclear Medicine images together immediately enabled her clinicians to locate the cancer more accurately within her body.

Dad Jamie explains: "Alice used the SPECT/CT scanner on many occasions, and it helped the doctors find out whether the cancer had spread. In her case, fortunately it had not.

"When Alice started her treatment, the chemotherapy hit her tumour hard and it haemorrhaged as a result. She needed an emergency CT scan to find out if she was bleeding internally and the scanner helped get her to the right treatment for emergency interventional radiology.

"Throughout her treatment, the SPECT/CT scanner was crucial in making decisions on her condition and care. It meant she could be scanned quickly, without having to be transferred elsewhere. For a small child seeing familiar faces is important and the radiology team at Sheffield Children’s have been nothing short of amazing."

Members of the public and businesses from across the region came together in a major fundraising campaign to fund the scanner in 2017. Since its install, it has been used for 637 nuclear medicine scans, and a further 189 CT scans.

It works in tandem with the main CT scanner at Sheffield Children’s, which scans around 2,000 patients every year and was funded by The Children’s Hospital Charity in 2010.

Alice then underwent a rapid 80-day course of chemotherapy on the Cancer and Leukaemia ward at Sheffield Children's to reduce the size of the tumour in her abdomen, followed by a nine-hour operation to remove it.

After 18 months of treatment, Alice has now entered remission. She has regular check-ups, while the team at Sheffield Children's continue to provide help, support and advice for her family whenever they need it.

Dad Jamie adds: "Alice recently celebrated her fourth birthday and is only with us today thanks to the amazing care we received as well as access to specialist medical equipment like SPECT/CT.

"Having this equipment at Sheffield Children’s has played an important part in my daughter’s treatment and the decisions made by the team looking after her, which may ultimately have saved her young life.

"So from the bottom of our hearts, thank you."

Mark Haines, Lead Practitioner in Nuclear Medicine at Sheffield Children’s added: “In Alice’s case, SPECT/CT ensured that we could localise areas of the cancer more accurately than ever before. We are also using the SPECT/CT scanner to image patients that we couldn’t previously due to the limitations of the old scanner.

“For example, we can use the scanner to look at the blood supply to the bone in patients that have had hip surgery. The results of the scan then help their clinician decide the best way to treat the patient going forward.

“The SPECT/CT scanner is also now used routinely in anyone who requires a CT scan where the patient has existing metal implants from a previous surgery. It is also used when our main CT scanner is out of use for maintenance and repair, avoiding patients being transferred elsewhere for their scan.”