Bears of Sheffield raises over £1M!

The Children’s Hospital Charity are thrilled to reveal for the first time that the Bears of Sheffield sculpture trail raised over £1M to help transform Sheffield Children’s. 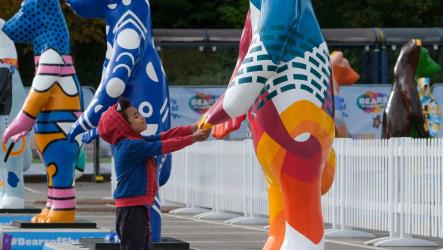 The final total announced today far exceeds the target to match the £600,000 raised by the Charity’s previous sculpture trail, the Herd of Sheffield, in 2016.

As a result, the Bears of Sheffield have not only completed The Children’s Hospital Charity’s three-year appeal for a new Cancer and Leukaemia ward, but will now also support the ongoing efforts to build a new on-site helipad at Sheffield Children’s.

Project Manager Cheryl Davidson explains: “The Bears of Sheffield brightened areas across the city last summer and showcased the creativity of the next generation too. They provided visitors and residents alike with the opportunity to explore places they’ve never seen before and celebrate the best of Sheffield’s diverse heritage.

“We are delighted to be able to reveal for the first time today the full impact of the difference everyone who supported the trail has made.

“This event was planned against the backdrop of ever-changing COVID-19 regulations and substantial economic uncertainty, so to raise so much beyond our expectations is an amazing achievement for everyone involved, as well as a real reflection of the depth of affection held in our community for Sheffield Children’s.”

The Bears of Sheffield, which were on display last summer, represented the largest public arts project Sheffield has ever seen. It involved 60, 2.1m tall sculptures which were sponsored by organisations and families and decorated by acclaimed artists.

There were also 100 smaller Bears which were fundraised for and decorated by schools, nurseries and colleges.

The Bears of Sheffield completed the appeal to build a new Cancer and Leukaemia ward at Sheffield Children’s. The new ward, which opened in December 2021, is bigger and brighter with improved spaces for parents to stay with their children and a dedicated playroom and schoolroom at the heart of the ward.

More patient bedrooms have en-suite facilities as well as a view of the park opposite the hospital, helping patients feel connected to the outside whilst they are getting better. They also include brand new televisions, more storage space and added extras to help make it feel more like home.

As the total raised by the Bears of Sheffield exceeded all expectations, the funds raised from the trail will now also help to fund a new helipad at the hospital.

Currently, air ambulances land in Weston Park where trauma patients are then stretchered across a busy road under a police escort before entering the Emergency Department at Sheffield Children’s. The new helipad will reduce the delays for patients who need urgent critical care from across South Yorkshire, Derbyshire and Lincolnshire.

Cheryl continues: “The fantastic amount raised by the Bears of Sheffield last summer has moved us one step closer to building our new Helipad at Sheffield Children’s, but we need your help to finish the fundraising. That’s why today, to celebrate all we’ve already achieved and aid that effort, we are asking our community to step forward once again for our hospital.”

To mark the anniversary of the trail next month, the special ‘Bear Miles’ challenge will run throughout July, August and September. The fundraiser involves walking, running, swimming or cycling a mile a day for 30 days, to help reach a wider community target of 2,021 miles to celebrate the year of the Bear!

Participants can register for free or alternatively pay £15 to secure a limited-edition medal and plush bear at the end of the trail. The aim is to raise as much as you can to support Sheffield Children’s Hospital.