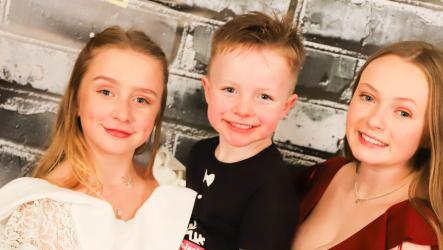 Jack Faulkner’s family and friends remember most his caring nature, warm sense of humour and his ability to time an eye-roll so well, entire rooms would descend into hysterics.

Almost two years have passed since 15-year-old Jack from Totley was diagnosed with an incurable brain tumour which would sadly end his life.

The fundraising effort which sparked the ‘TeamJack’ movement was instigated by the teenager himself, as he set up a JustGiving page whilst beginning chemotherapy on the dedicated neurosciences ward, Ward 5, at Sheffield Children’s Hospital.

As the latest milestone approached, the cancellation of planned events left the fundraising just short of their £100,000 target, which is when Mum Sally thought of a fitting way Jack could round up what he began:

“It makes me quite emotional to talk about it, but when Jack became ill, he sold his old phone to his Grandpa for £80. We had just left the money in his wallet- I couldn’t bring myself to touch it.

“When I found out we were short, I knew what we had to do. As well as being the joker everyone remembers, he also had a very caring side. Dan and I were sobbing down the phone when I suggested it, but it felt right. This has always been about him and it’s fitting that it was Jack’s own money got us here.”

Dan added: “Having Jack take us across the line really hit home, it was a moving moment. What we have been able to achieve together has been nothing short of incredible. I would never have dreamed to raise so much, all in the name of a very courageous young man.”

The fundraising is already having a positive impact at Sheffield Children’s Hospital. Jack spent 79 nights continuously on the neurosciences ward and three of his suggestions for improvement; video games consoles, new curtains and two specially adapted wheelchairs have already been funded.

Sally continued: “It’s great that the ward now has some nicer surroundings and we’ve helped to make things brighter. The Children’s Hospital Charity listened to Jack’s suggestions and they’re already making a difference.”

For Jack’s parents, the fundraising drive effort has helped them deal with the loss of their son:

Mum Sally said: “After everything that happened when Jack passed, I felt lost. The fundraising gave us a sense of purpose and focus, to build on Jack’s legacy and continue helping other people. It’s just been amazing how many people have stepped forward and asked ‘can I join Team Jack?”

“Jack’s friends have been phenomenal too. The support they have given his younger sister Emily at school has been amazing, it’s such a relief to know they will always look out for her. They also included us in celebrating their GCSE results and their Prom; those were very difficult days but it meant an awful lot.”

Dad Dan added: “Being able to fundraise and train for events has personally allowed me to keep my focus. Without that kind of structure in my life, I honestly don’t know what would have happened.

“The Children’s Hospital Charity’s team have been great, and TeamJack as a community has provided a sense of normality and allowed us to get to a point where we are in a good place. I know for sure, that what we’ve been through has brought us closer together and made us stronger.

“We will continue to raise as much money as we can. The next milestone might take a little longer to reach, but it will be just as important.”

As well as the fundraising, the family also held a TeamJack Snowflake Charity Ball in November. The nurses and doctors who cared for Jack attended free of charge as a gesture of thanks from the family. Mum Sally was also involved in organising last summer’s Neuroscience Family Fun Day at Graves Park in Sheffield, which raised over £4,700.

Rachael Thomas, Events Fundraising Officer at The Children’s Hospital Charity added: “I was really moved to find out that Jack himself helped the fundraising in his name reach this incredible total.

“We’re so thankful to everyone in TeamJack who continues to dedicate themselves tirelessly to this effort, which has already achieved so much. It is lovely to know that the fundraising has already been used to help improve the ward’s surroundings, particularly for older patients, in a legacy that is sure to last for generations to come.”