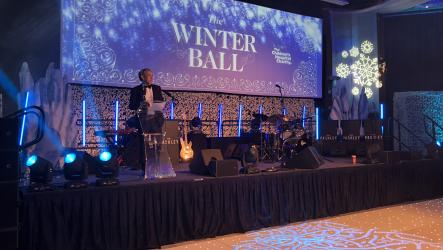 A glamorous charity ball held in aid of Sheffield Children’s Hospital has raised a record-breaking £200,000!

The Children’s Hospital Charity’s glitzy Winter Ball was attended by more than 300 people on Saturday (November 30th) and hosted by BBC Breakfast presenter and charity patron Dan Walker. Held at the University of Sheffield’s Octagon Centre, it was kindly sponsored by Graham Royle of the GRI Group.

The record-breaking total was made possible thanks to a selection of money-can’t-buy prizes, which included a unique opportunity to spend the day with Sheffield United manager Chris Wilder, a personal tour of McLaren’s state-of-the-art facilities in Woking by the founder’s daughter, Amanda McLaren and a signed original sketch of ‘National Hug Service’, by beloved Sheffield artist and charity patron Pete McKee.

The evening also featured performances by Sheffield artist and former The Voice semi-finalist Lucy Milburn as well as the inspiring story of 16-year-old Emily Eccles, who addressed the audience about the care she received at Sheffield Children’s Hospital.

Emily, from Sheffield, was left with just one centimeter of skin keeping her jaw attached to the rest of her head after a horse-riding accident in August. Consultant surgeon Ricardo Mohammed-Ali rebuilt her face using three titanium plates and more than 160 stitches.

Performances from The Dance Mob, an elite team of professional dancers and acclaimed Sheffield singer Paul Pashley rounded off the hugely successful evening.

David Vernon-Edwards, Director of The Children’s Hospital Charity, said: “We were overwhelmed by the generosity of everyone who attended the Winter Ball on the night, as well as all those who so kindly donated prizes to help us achieve this record-breaking total.”

“The money raised will leave a lasting legacy at Sheffield Children’s Hospital, as we seek to match the existing world-class care with the world-class equipment it deserves.”