“We’ll have each other”

For many newly-weds, their dream honeymoon may involve a restful and relaxing getaway. However, one couple will be celebrating their marriage later this year by tackling an altitude of 3,300m and mountain passes reaching 4,200m to raise money for Sheffield Children’s. Lewis and Lucy Cain are embarking on their biggest challenge yet to take on the Inca Trail for The Children’s Hospital Charity. 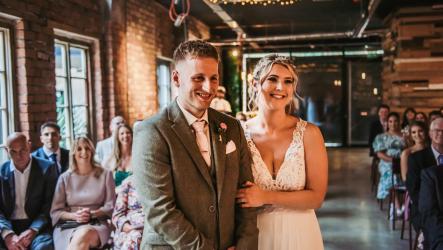 For many newly-weds, their dream honeymoon may involve a restful and relaxing getaway.

However, one couple will be celebrating their marriage later this year by tackling an altitude of 3,300m and mountain passes reaching 4,200m to raise money for Sheffield Children’s Hospital.

Lewis and Lucy Cain first met at sixth form in 2010 but didn’t get together until they reconnected four years later. Now, they are embarking on their biggest challenge yet to take on the Inca Trail for The Children’s Hospital Charity.

Lucy remembers how they met: “We were in the same form at sixth form, but I don’t ever remember us speaking apart from in one lesson for a couple of minutes. We had different friend groups and I thought he was one of the cool kids- I definitely got that one wrong!”

Lewis adds: “After sixth form, we had a couple of mutual friends and started spending more time together. I asked her out and we went for a game of mini golf, which I won of course! We started seeing more of each other and things just felt like they were meant to be.”

In May 2019, Lewis proposed in Bergen in Norway, and after two cancelled wedding dates due to the pandemic, the couple finally married in September last year with their friends and family present.

Lucy recalls: “It was fab, the best day of my life, to have everyone we loved around us. It was everything I could have asked for and more, I only wish it could have gone on longer.”

For their honeymoon, the couple will be taking on the Inca Trail trek for Sheffield Children’s this September. Lucy works as the Community Fundraising Officer in the Charity Team.

Lucy continues: “I think I mentioned it to Lewis as a joke initially if I’m honest and then he said, ‘maybe we should’. It’s a once-in-a-lifetime opportunity and something we wouldn’t do otherwise. I love my job and I’ve been inspired by the stories I’ve heard in the community, so why shouldn’t I challenge myself too?

“If the patients and families who are cared for by Sheffield Children’s can go through what they do, and the staff can be as hard-working, passionate and motivated as they are, I can definitely challenge myself to do something I’ve never done before.

“We’re really looking forward to meeting all the other fundraisers on the Trail and we’ll have each other too, which is all that really matters.”

Lewis adds: “We’d discussed New Zealand and America, but we hadn’t really settled on anything and then we saw this trek! We thought it would be a great experience and a great way to do something not just for us, but for others too. I can’t wait to get going now, I’m really looking forward to the adventure and being able to experience a country and culture I’d never really thought of visiting.”

The happy couple have raised £700 so far for The Children’s Hospital Charity, having taken on a series of challenges including Veggie February while Lewis ran the Sheffield Half Marathon in March and also recently completed a 24-hour gaming marathon.

Lucy and Lewis, along with their beloved Romanian rescue dog Ken, also ran and walked 250-miles in a month while they’ve also been selling clothes and some of their possessions at car boot sales.

Lewis adds: “For anyone that has sponsored us so far, I’d like to say a massive thank you. Times are tough at the moment and I think for people to be able to sacrifice some of their own money to help others is a really selfless thing to do.

“Every little helps, no matter the amount, and with Lucy’s job I get to see all the wonderful work that the Charity does to help make Sheffield Children’s Hospital the best it can possibly be.”