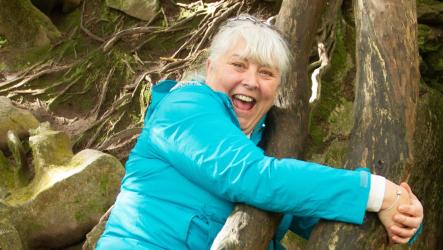 Netty Whitlam had just turned 60 when she suddenly passed away last October. Her friends and family remember her as strong willed, forthright and a straight talker- ‘a true Yorkshire lass.’

They also remember someone always available to listen, provide a shoulder to cry on, offer friendly advice and a cheeky side that loved to make people laugh.

Her husband Phill remembers: “She had a very mischievous smile, and when you saw it, you knew that something funny was about to happen!”

Netty, from Sheffield, worked in data analysis for South Yorkshire Police before retiring and spent the last 15 years of her life living in Crete. Six weeks after her diagnosis of lung cancer, Netty sadly passed away.

Shortly after her passing, Netty’s family set up a tribute page to celebrate her memory. The page provides a dedicated place for families and friends to remember someone special whilst helping to make a difference to the lives of patients who visit Sheffield Children’s.

The page has since raised almost £1,500 for The Children’s Hospital Charity.

Netty’s stepson Terry explains: “We all knew how much Netty meant to us, but to see all the donations and messages come in from people all over the world in the days after she passed really did help.”

The fundraising in Netty’s honour continued decades of support for Sheffield Children’s, spurred by the life-saving treatment two of her family have received from the hospital.

Netty’s niece Sara was diagnosed with panhypopituitarism in 1996, which is the pituitary gland at the base of the brain does not release enough hormones.

As a result, she was in and out of Sheffield Children’s throughout her childhood, with the condition making her extremely vulnerable to infections and consequently seriously ill on several occasions.

In 2009, Netty’s grandson Carter was diagnosed with left congenital diaphragmatic hernia while still in the womb. He had his hernia repaired at just four days old, before spending the next 12 weeks on the Neonatal Surgical Unit (NSU) at Sheffield Children’s.

However, it was only the start of Carter’s care. He was then readmitted to Sheffield Children’s five months later, following a rare complication that resulted in a perforated bowel.

His mum, Laura recalls: “During this time, we were told on several occasions to prepare for the worst. He was once so poorly that the surgeons could not risk taking the time to move him to the operating theatre, so they performed a life-saving surgery on the ward.

“His heart stopped a couple of times during the procedure, but the excellent medical team were able to bring him back. On another occasion, we were all told to say our goodbyes because he wasn’t reacting to treatment and his body was poisoning itself beyond repair. Thankfully, the consultant tried one final treatment and he started to pull around.

“Netty spent many hours by Carter’s side when he was in hospital and she witnessed first-hand the dedication and commitment of the staff. It left a lasting impression on her, as it did all of us. We saw the relentless hours they worked, shed tears with them, felt the frustration of backwards steps we faced as well as the joys when he healed.”

“She was fantastic throughout it all, she would just hold his hand for hours on end, allowing us to rest, shower and eat. From seeing his 20-week scan during pregnancy, the odds have always been stacked against Carter. He simply would not be here without Sheffield Children’s.

“At one point, the surgeons named him ‘the poorliest baby in Sheffield’ and then ‘the Christmas Miracle’. The road ahead has had many, many twists and turns but slowly but surely he has recovered and been getting stronger ever since.”

Netty’s family’s fundraising for The Children’s Hospital Charity started even before Carter was discharged from Sheffield Children’s.

Netty’s stepson Terry explains: “As a family, we have all helped in fundraising for Sheffield Children’s. Netty and my dad used to do a yearly fundraising event, a ‘Mad Hatter’s Tea Party’ in Crete. They quickly became the talk of the expat community.

“The money would support my Dad’s yearly triathlon to support the hospital. We have all helped with the effort, I have run a half marathon, Carter’s mum and dad have done loads of fun runs, bake sales and zip-wired down the roof of Hillsborough Stadium.

“Supporting Sheffield Children’s is something we have always done as a family and Netty always supported every one of us all of the way.”

The incredible amount raised after Netty’s passing inspired the family to commit to help sponsor the nurse’s office in The Children’s Hospital Charity’s ongoing fundraising for a new Cancer and Leukaemia ward.

Netty’s husband Phill explains: “We all wanted a permanent way to remember Netty, and Sheffield Children’s was everyone’s first thought. Given our enormous debt of gratitude to the hospital, and with Netty herself having passed away from cancer, we feel this is a fitting way for her to be remembered.

Stepson Terry adds: “When Netty was in hospital, the care the nurses gave her was incredible. When the opportunity to sponsor the nurses’ office on the new Cancer and Leukaemia came up, it just seemed like something she would have liked.

“We can only say thank you to everyone who has donated in her memory, it really is amazing given these difficult and uncertain times we are currently in.

“I think she would be amazed and shocked to see how much money has been raised. She’d probably tell us all to stop making such a big fuss of her, but there’s no doubt she would love seeing the money support Sheffield Children’s Hospital.”

For more information on In Memory Giving in support of Sheffield Children’s, click here