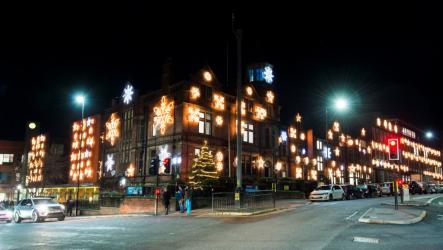 A sparkling display of snowflakes have lit up Sheffield Children’s Hospital once again, marking the beginning of the festive season and raising a record-breaking amount towards its Cancer and Leukaemia ward appeal.

Over 290 snowflakes, more than ever before, are illuminating the city of Sheffield to support The Children’s Hospital Charity. The twinkling lights are set to raise more than £335,000- a huge increase on the previous record of £256,000 which was set in 2018.

The snowflakes, forged from Sheffield steel, are also decorating the exterior of Crystal Peaks Shopping Centre and the University of Sheffield’s Advanced Manufacturing Research Centre (AMRC) for the first time. More than 20 are also lighting up Pinstone Street thanks to a partnership with Sheffield City Council.

The Sheffield Children’s family has more than one home and this year’s record-breaking flurry of lights will also be on display at the hospital’s Ryegate Children’s Centre, which hosts the Child Development and Neurodisability Centre as well as The Becton Centre, which treats children with a range of difficulties that impact their mental health and emotional wellbeing.

The snowflakes have been carefully assembled over several weeks by more than 200 volunteers from local organisations including Lloyds Banking Group, the Home Office and Wesleyan Insurance.

The biggest snowflake on Sheffield Children’s Hospital, the special tower snowflake, has been kindly sponsored by Tesco. In total, 54 Tesco stores from as far afield as Skegness and Lincoln have fundraised for snowflakes, while 32 Co-op shops are also raising money.

This year’s snowflake display would not have been possible without the generous support of the Estate Management team at Sheffield Children’s Hospital, maintenance company Stroma Specialist Access, platform company Elev8, Christmas supply company Fizzco and Steel fabricators Twiggs of Matlock.

You can also get involved with your own snowflake. Donate £30 or more and your name will appear on a digital hospital and you will receive your very own snowflake certificate from Theo Bear to treasure. Visit www.snowflake.tchc.org.uk to get yours.