12 months to make redeveloped Cancer Ward the best it can be!

We are pleased to confirm that a detailed business case for the redevelopment has now been approved by the board at Sheffield Children’s NHS Foundation Trust. Contractors will now be appointed following a tender process and we expect building work to be able to begin in April 2021.

The new ward will increase the number of beds to sixteen and the number of specially filtered isolation rooms to six. It will also create a purpose-built break-out space for teenagers and young adults for the first time, while the play and school rooms will be relocated to the heart of the ward.

A parent room on the new ward is also being fundraised for by PACT (Parents’ Association of Children with Tumours and Leukaemia) which will be a bigger and brighter space, able to host coffee mornings and breakfast clubs when it is safe to do so. It will also act as a place on the ward for parents to support each other through what is often a difficult time.

A centre of excellence, the Oncology and Haematology department at Sheffield Children’s covers a population spanning an area from South Yorkshire through to Nottingham and Grimsby.

The ward provides treatment for cancer and blood disorders in children from babies through to 19-year-olds in South Yorkshire, Derbyshire and Lincolnshire. It also sees patients from across the UK for chemotherapy, operations, and bone marrow transplants.

It is hoped the new space will be ready in 12 months’ time, yet how much the space can be improved will depend on how much can be raised in the intervening period.

Today, the Charity are revealing a proposed ‘wish list’ for the single patient bedrooms on the redeveloped ward. It is an impression developed following an extensive survey of patient, family and staff feedback which was conducted on the ward in September 2020.

Among the survey’s key conclusions, from 44 respondents, were:

The Children’s Hospital Charity’s arts programme, Artfelt, have been working with the Project Team which includes Day Architects, ward staff and the Estates Team at Sheffield Children’s. This proposed new design for a patient bedroom seeks to address the family feedback: 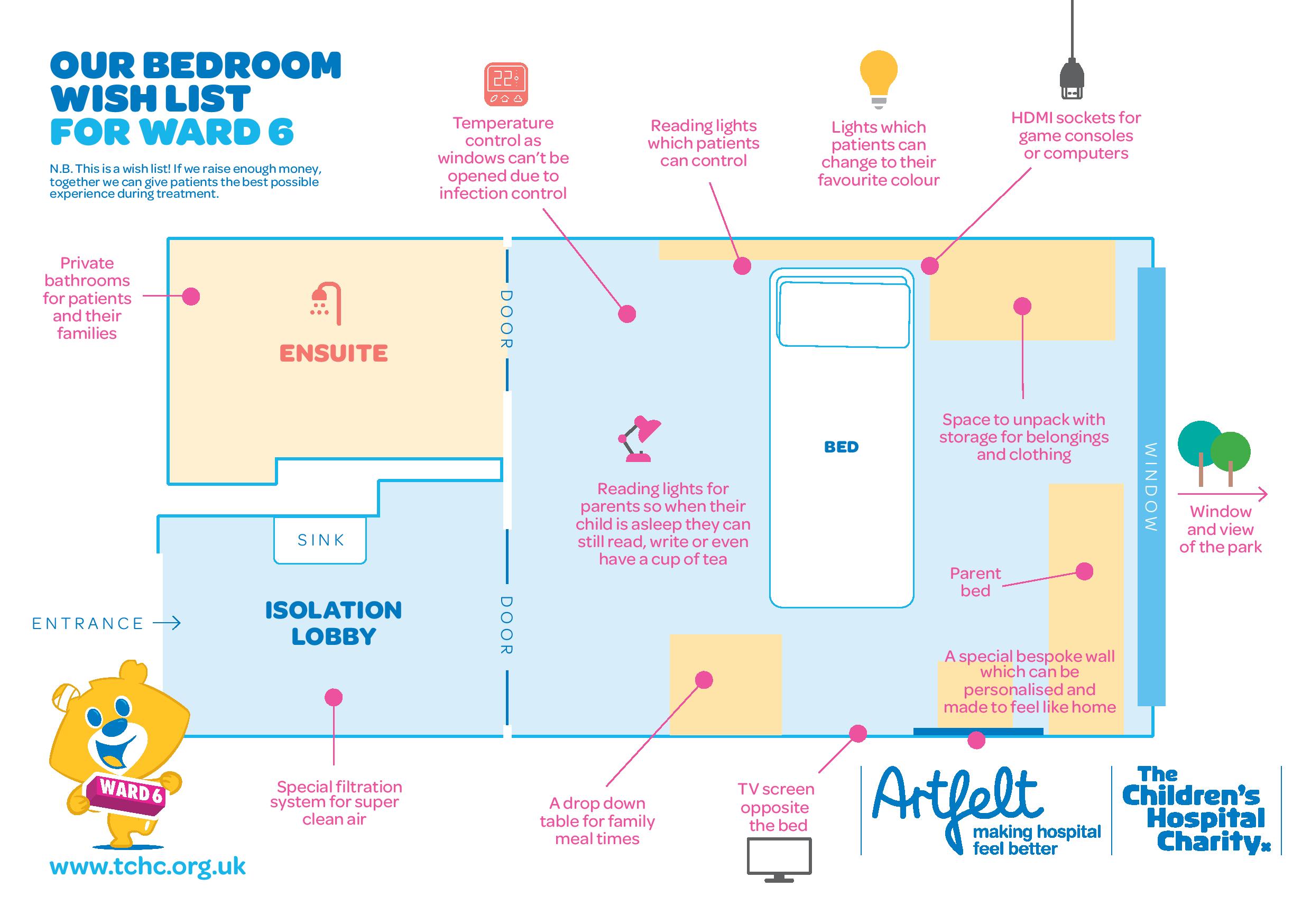 The single patient bedrooms provide quiet for sleep and rest. They could also mean parents and children spend more quality time together, with privacy for treatment and personal activities including simple everyday tasks like getting ready in a morning.

Cat Powell, Artfelt Manager at The Children’s Hospital Charity said: “We are delighted that with the approval of the board at Sheffield Children’s NHS Foundation Trust, the new Cancer and Leukaemia ward has moved another step closer.

“Today is rightfully a day of excitement and anticipation, the culmination of more than two years of effort. But our work is far from done. While a provisional timeline for the building work is now in place, the extent to which we can make the dreams of the patients, families and staff at Sheffield Children’s a reality depends on the fundraising over the next year.

“Put simply, what we can do depends on you. The plans we have outlined today illustrate what is possible with your support. We can utilise the best of technology, take inspiration from best practice across the healthcare sector and deliver a space which meets the needs of families using it. We can match the incredible care provided, but the clock is now ticking.”

The renewed fundraising drive comes amid ongoing uncertainty. COVID-19 is set to cause significant fall of between £2.5-£3million in The Children’s Hospital Charity’s projected income this year.

Major events including organised runs and walks supporting the appeal have been rescheduled, while the Charity’s city-wide public arts trail, The Bears of Sheffield and overseas Inca Trail Challenge have both been postponed. However, individuals, communities and workplaces have continued to support Sheffield Children’s where they can, with every donation making a difference.

Cat continued: “We understand these are difficult times for everyone, but if you are able to support us in any way, whether it is by planning a fundraiser, giving what you can this Christmas or even just telling a friend just how special Sheffield Children’s Hospital is, we would be very grateful.”