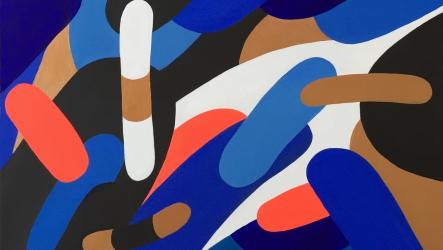 Sérigraphie - screen printing in French - by Florence Blanchard came to Sheffield Children's Hospital in collaboration with Artfelt. With an emphasis on screen printing and printing process, the exhibition explored the French artist’s creative evolution, from early cartoon-like figurative works to her current bold abstract pieces. Her scientific training directly inspires and informs her current art practice where bold geometric shapes, fluorescent colours and representations of particles collide in riots of abstraction.

Born in Montpellier, Florence cut her teeth as a graffiti writer on the streets of France before moving to New York in the early 2000s. It was in New York where the twin tracks of Florence’s talents really blossomed; painting and science. Following a decade-long urban apprenticeship creating murals for hip-hop festivals and private commissions, Florence began exhibiting her work in galleries in Brooklyn and Berlin. At the same time, she doggedly pursued her gift for science, gaining a PhD in molecular biology from New York University in 2008. She now co-runs B&B gallery and screenprinting studio (Est. 2013) in the the Cultural Industries Quarter in Sheffield, where she invites international contemporary artists to collaborate on print editions, periodic exhibitions.

For this exhibition Florence Blanchard has provided about 30 artworks including paintings and prints, and produced ‘Blossom’, an exclusive limited print edition, which is only available at the hospital.

Prints of 'Blossom' can be bought in our web shop, with proceeds from all sales go towards supporting Artfelt's work.