March of the Misfits 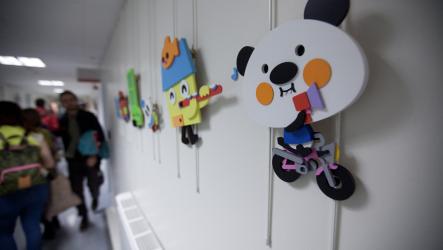 March of the Misfits came from Mike and Katie, who make up the design duo better known to the world as Tado.

Based in Sheffield for the past 12 years, this pint-sized creative powerhouse has produced an endless list of darkly adorable characters, artwork and projects that have intrigued and delighted individuals and clients of all ages worldwide.

Started in 2001 when the pair began to work together at university, Tado quickly became an established name. Their work is nearly always character driven and has been featured on everything from sculptures in China through to hugely popular fashion collaborations, trainers, toys and animations. Everything they do is produced in total collaboration from their tiny studio here in Sheffield – whether it be taking turns in drawing, painting, drilling, gluing, scribbling or clicking.

Mike and Katie have worked very closely with the Artfelt programme for several years now, producing artwork for several departments at Sheffield Children's Hospital. They are also behind The Children’s Hospital Charity’s Theo bear mascot.

'March of the Misfits' was a fantastical parade of whimsical creatures from the deepest depths and tightest crannies of Mike and Katie's imaginations. The gang featured some of their most well known and loved characters alongside some fresh new faces, all of whom welcomed visitors to the building with a procession of joy and positive energy.

The exhibition was inspired by The Long Gallery itself and all the people who pass through it every day. The pieces celebrated all the wonderful characters of the hospital and the amazing work that goes on there.